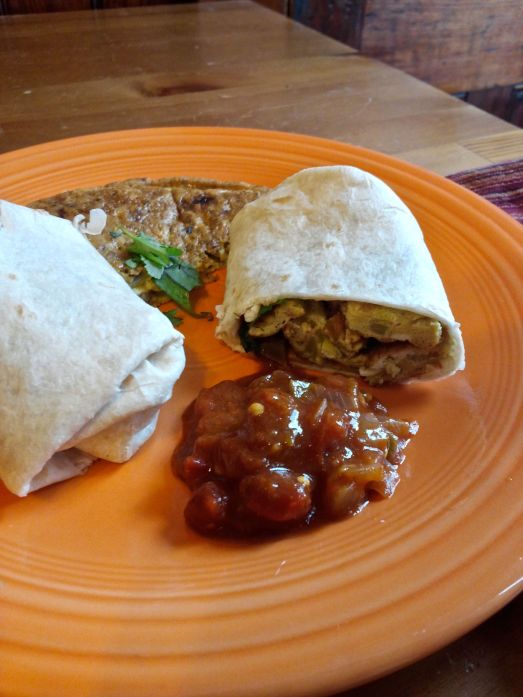 Yesterday, an Indian friend said this Indian Omelet recipe “looks legit,” so I decided to try it; the Indian omelette reminds me of the Chinese omelette, egg foo young, and is prepared quite similarly just with different spices and a lot less oil.

For my version of this omelette (2 servings), I used the following ingredients:

(I reduced the turmeric quite a bit from the original recipe because I’ve found that if I don’t cook it in oil in the pan first, it can taste metallic to me.)

As with any omelette beat the eggs, I added a bit of water.  Next whisk in all the other ingredients (except the oil for frying). Over medium heat add the oil to an omelette or other non-stick frying pan. When oil is hot, but not smoking, be sure it’s spread evenly over the pan surface and add the egg mixture, spreading it evenly. Cover immediately with a pan lid or serving plate, and cook for a few minutes, checking to see that it is solidifying, but not yet cooked through. (Expect the bottom to brown in the oil.) Before the egg is completely cooked on top, slide the omelette onto a plate that is larger than the pan, then place the pan upside-down over the plate and flip it over so that the omelette is back in the pan. Cook this other side for a minute or so and slide it onto a serving plate; garnish with cilantro leaf.

Despite all the ingredients and spices, I found my omelette uninteresting on its own (and I’m not really a fan of breakfasts dominated by egg), so as I’ve done before, I chopped the omelette into large pieces and used it to fill a large, warmed flour tortilla as a breakfast burrito.

As an additional burrito filling and flavorful accompaniment, I prepared a hot curry salsa by stirring about 1/2 teaspoon of Indian curry paste into about 1/4 cup tomato-based Mexican salsa.

Mixing up a curry salsa.

I used less than half the omelette for the burrito and served it with additional hot curry salsa on the side. 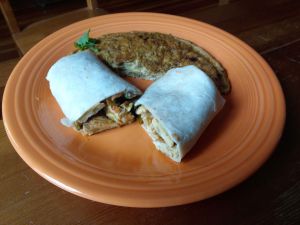 An Indian omelette and breakfast burrito.

This was a nice Indian-fusion variation of the wonderful Tex-Mex breakfast burrito. Another way to make it more Indian would be to use chappati instead of a mexican-style tortilla. I was first introduced to the frozen variety of chappati by an Indian housemate; they’re quite good, you just take them from the freezer right into the fry pan for a few minutes, but the frozen ones are smaller than burrito-sized tortillas, so would make for tiny burritos.

The Indian omelette is yet-another way to put some variety into your breakfasts of vegetables and eggs!

Here is the recipe I used as the basis for this omelette:

And some related recipes:

I made an “egg roll,” (nothing like a Chinese egg roll) as in this video, with scallion, black pepper, scrambled egg, and a tortilla and that works out great too and is yet-another breakfast burrito variation! 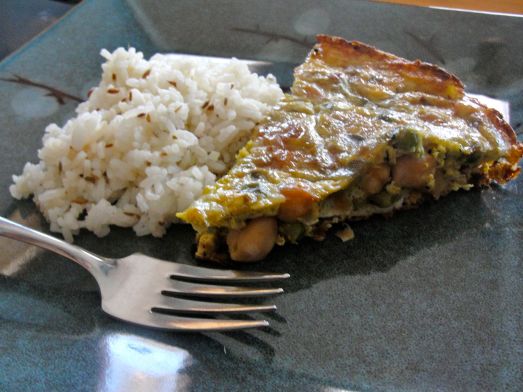 I make a lot of curries; they’re flexible and amenable to creativity with whatever vegetables you have on hand.
I’m not a big breakfast person, but I do occasionally make a frittata; it’s easier than most might think (and you don’t bother with a crust like quiche), as long as you have a skillet you can move from the stovetop to the oven.

This Leftover Curry Frittata is simply a frittata made with your leftover curry from the night or nights before.
Here, I used a leftover curry made with cabbage, chickpeas, and coconut cream.
I bet you could even add a bit of leftover rice to the frittata, but rice also makes a nice side for breakfast.

Below are some related posts with preparation details for frittatas and vegetable curries.
Another tip is that I find that frittatas turn out fine with just egg and water (instead of milk), if you prefer to keep it dairy-free (or are out of milk, like me).

Asian-inspired frittatas are nice too, with chinese vegetables and a touch of hoisin and chili garlic sauce. Also, these are a bit less work than Egg Foo Young, that makes a great breakfast and reheats well. 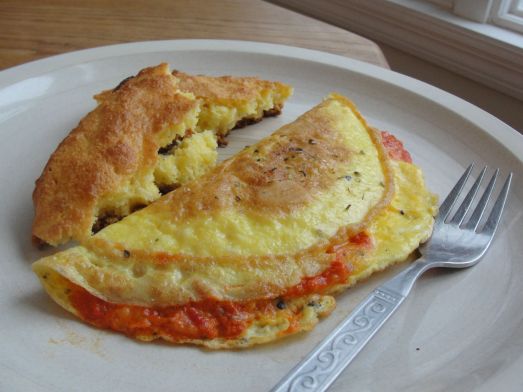 A Sharp Cheddar and Kyopolou Omelette with Cornbread

Maybe it’s just the winter weather, but I was definitely in the mood for something bright for breakfast, and yellow is my favorite color, so I decided on cornbread and eggs. Actually, that’s about all I had left in the house… so more than one reason for this meal.

This is merely a two-egg omelette with sharp cheddar cheese and kyopolou. I simply used the prepared Trader Joe’s variety that they call “Red Pepper Spread,” but authentically from Bulgaria. On the side is cornbread, prepared round from Jiffy brand corn muffin mix. (I substituted greek yogurt diluted with a bit of water for milk in the cornbread, since, *surprise*, I was out of milk.)

A Sharp Cheddar and Kyopolou Omelette with Cornbread

The omelette was served with a sprinkle of dried oregano and it made for a cheery, basic breakfast… it’s practially sunshine on a plate and maybe great fuel for wintertime Coldplay. :)

Vegetable frittata and romaine lettuce with oil and vinegar

I’m not a big fan of just eggs for breakfast – one is usually enough for me, and must be accompanied by more interesting textures. But, of course, eggs are inexpensive and nutritious, so I decided to try a frittata again. I had some fennel stalks around, and was curious to try them (since I love the flavor), after having used the milder fennel bulb for fennel au gratin at Christmastime and not wanting to merely discard the green stalks.

Preheat oven to 425° F.
In an oven safe skillet, over medium low heat, sauté potato and fennel with salt and pepper until potato is somewhat tender. Add white portion of scallions and mushrooms, and lighly sauté. Stir pesto into vegetables and immediately pour egg mixture into skillet evenly over sautéed ingredients.  Cook for a few minutes, until egg mixture begins to set and top with tomatoes, shredded cheese, and scallion greens. Place skillet in oven for 7-15 minutes, until egg appears firm on top and is cooked through.

I served frittata wedges with chopped romaine lettuce and a dressing of simply olive oil and red wine vinegar. This one came out nicely, and the bit of fennel stalk worked nicely to flavor the potatoes.

Chicken and Egg Breakfast Nachos with pasilla salsa and jalapenos.

Which came first, the chicken or the egg?
It was the egg. (Dinosaurs, the ancestors of the chicken, and many other animals layed eggs.)

This morning, I got up late (as usual), saw this beautiful snowy scene outside, and perused two generous online invitations to brunch this morning.  Hmm, shower, dress, find the shovel, … drive the 4×4 to one of these restaurants or just sit my ass on the couch? Guess which one won.

My backyard with the first proper snowfall of the season

For this breakfast I boiled a couple fresh jalapenos, whipped up some scrambled eggs, stirred in some chipotle-seasoned pulled chicken; bell pepper and jalapeno strips (leftover from yesterday’s fajitas); and shredded cheddar.  Then I assembled the nachos on a plate with blue corn tortilla chips, topped with a pasilla salsa (the first I opened from the summertime canning) and a tender jalapeno. 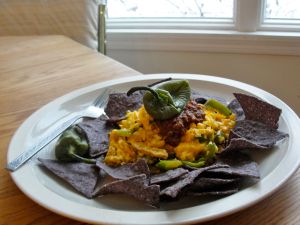 Breakfast nachos on a wintery morning.

A pleasant, if not lonely, breakfast on this beautiful wintery morning.
I even eased into the season with some holiday music.

I hope my friends fared as well with their brunches.

A breakfast of summertime bounty

I’ve been away from blogging for a bit but have just wrapped up weeks of work (on this year-long project) that culminated in a research paper manuscript submission last night; now I’m looking forward to time for friends… and for breakfast, and perhaps the two combined.

Here’s my morning’s breakfast of summertime bounty with ingredients from the farmer’s market and some lovely friends:  scrambled egg and skillet potatoes with avocado and mesclun of arugula and other salad greens home-grown on my front porch, thanks to a lovely person that trusts me to babysit them.

The skillet potatoes are sliced red potato from the market, pan-fried in canola until tender, seasoned red pepper flakes, oregano, fennel seed, salt, and pepper and with shallots and garlic from a generous friend’s garden.

The scrambled egg is prepared with crisp corn tortilla strips and red pepper spread. Unfortunately, I did not know the chicken. :) 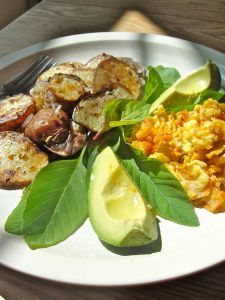 A breakfast of summertime bounty

Happy summertime eating with your fresh ingredients and friends!

Here’s a colorful quick breakfast (and, for me, lunch) idea: poached eggs atop hummus on a open-faced quesadilla of flour tortilla with sharp cheddar cheese, tomato salsa, fresh scallion and habanero pepper.

This is simply a melenge of favorite ingredients that I almost always have on hand.

Here’s a typical sort of quick breakfast that I make… especially since plain scrambled egg is *boring*.

First, cut one or two corn tortillas into strips (maximum length about half the diameter of the tortilla) and crisp these in olive oil in a pan, then remove from heat.  Saute sliced baby bella mushroom, perhaps with some garlic, salt and pepper, and place those aside as well.  Prepare one or two scrambled eggs as you like; here I mixed in about 1 T. of kyopoolu sauce; I’ve mentioned this red pepper, eggplant, and garlic-based sauce in a number of earlier posts.  Lastly, mix the ingredients together and top with cheese if you like:
A great way to add taste and texture to boring old scrambled egg!

I learned to add crisp corn tortilla strips to scrambled egg from my Mexican sister-in-law. :-)

With some left-over grilled shrimp and dipping sauce, I made this delicious quesadilla for a quick breakfast.

It is simply hummus, cooked shrimp cut to bite-sized pieces, ripe avocado, and a coconut milk-based Peanut-Lime Dipping Sauce warmed open-faced in a pan over medium heat until the tortilla reaches the desired crispness.
I wait to add the avocado at the end, since I prefer it unwarmed.

As it happens, hummus is commonly eaten for breakfast in its countries of origin.

Hmm, now that I think of it, since I substituted hummus for cheese, I guess it’s not a proper quesadilla.  How do I get away with this stuff?  Yay for fusion cooking!

I’ve been making quesadillas since I was a child, having been introduced to them by my California cousin.

Here’s a quesadilla-making tip: while I didn’t do it here, when warming the quesadilla in the pan, spread the ingredients, especially the cheese, over the whole tortilla, not just one half.  The cheese melts faster, and the other ingredients warm faster, so you’re less likely to over-brown your tortilla… and the melted cheese acts as an adhesive so you can still fold it over without having the ingredients falling off the “top” half.

Here’s the recipe for the sauce: