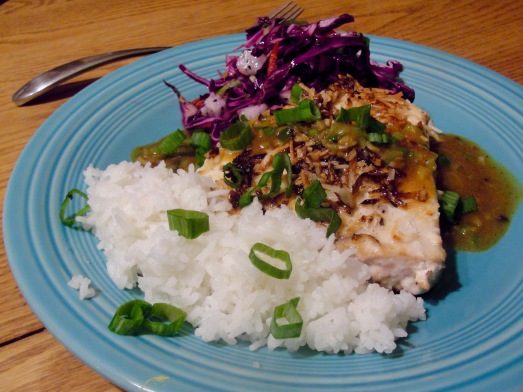 Tonight we made a curiously medieval seeming meal with swords and dragons. We picked up some swordfish steaks and a dragon fruit with the notion of preparing fish with a fruit salsa, but the latter ended up as a cabbage-based slaw instead – looking a bit like dice has been thrown in. :-)

Ingredients, for the slaw:

Prepare the slaw much as you would any fresh cabbage and vinegar-based coleslaw. Wait until the end, though, to carefully stirring the cubed dragon fruit in, when your slaw has been otherwise prepared to your liking.

Ingredients, for the swordfish steaks and sauce:

While the slaw sits for a while, salt and pepper the swordfish steaks and coat with flaked coconut.  For the sauce, simply stir about a teaspoon of corn starch into the orange juice and set aside for after the fish has been cooked. 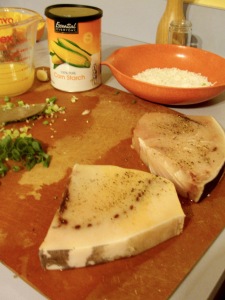 Add a few tablespoons of oil, e.g., canola, to a skillet heated medium to medium-high.

Pan-fry the swordfish steaks, about 4-5 minutes per side (for these that were about 1 inch thick), flipping them over just once.

Plate the steaks and keep them warm. Meanwhile, reducing the pan heat to medium-low and quickly sauté the whites of the scallion just lightly, combined with whatever coconut flakes remained in the pan. Next, immediately pour the orange juice and cornstarch mixture into the pan, stirring with the scallion and coconut until the sauce thickens.

Pour sauce over each of the swordfish steaks, top with scallion greens, and serve accompanied by the fruit slaw and perhaps also jasmine rice.

This was a tasty meal. I’ve not prepared swordfish steaks before, but they were quite nice topped with this simple coconut-scallion-orange sauce. Swordfish is substantial in texture and was nicely contrasted by the fresh, crisp, spicy, tart, sweet fruit and cabbage slaw. I bet it would go just as well with a fruit salsa instead.

The leftovers, with some black beans and salsa added, made a great “sad desk lunch!”

Here are some related recipes I consulted for ideas: