Given how much I love beer, including German beers, I was surprised I hadn’t thought to make fresh pretzels before; they’re a perfect companion for beer and bready palate-cleanser when sampling beer styles.

These pretzels were prepared for a party where, thankfully, they were a popular addition.

For this recipe I had help from my companion, more experienced in bread-making than me. She prepared the dough based on this recipe.
For a double batch (about 16 medium-sized pretzels), we used the following ingredients:

There are a lot of good video recipes online showing the technique to roll-out the dough, form the pretzels, boil, and bake, so I won’t describe the process here, but rather refer you to the recipes and videos linked below. (I especially liked this video.) 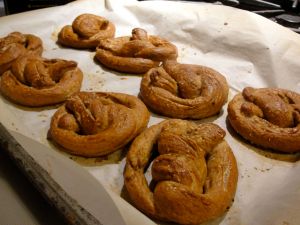 We served the pretzels with a coarse mustard (as god intended), e.g., Grey Poupon Country Dijon, and also a spicy sauce made of mayonnaise and Sriracha hot pepper sauce.

All in all these turned out quite nice and were safely boiled in baking soda water rather than the traditional, but caustic, lye solution.  I knew lye was used for pretzels and lye bread, but never knew exactly how until researching these pretzel recipes.

While we didn’t follow one specific recipe to the letter, here is the primary one we consulted (first), plus a number of videos demonstrating the preparation techniques:

This was a fun baking project; I suggest you try freshly homemade pretzels as well!