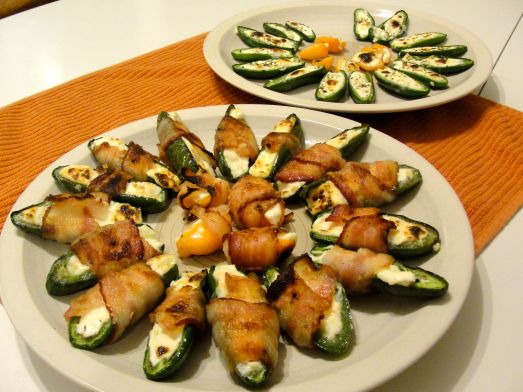 Habanero and Jalapeno Poppers: bacon or vegetarian with epazote

To keep New Year’s Eve hot, I prepared spicy poppers: some with the “traditional” jalapeno and some with the more adventurous habanero.

These may seem pretty straightforward to prepare (just take a bit of time), but I’ll give a few suggestions and tips, after having made them a few times.

Halve, seed, and devein the peppers.

When preparing these on a broiler pan under the broiler, wrap the top of the pan in aluminum foil and cut slits in the foil (where the slits in the pan are) so that bacon grease will drain. Also, pour a half cup of water into the bottom of the pan to keep the drained fat from burning and be careful to not tip the pan.

Carefully fill the pepper halves with cream cheese, optionally wrap with bacon (tucking one end underneath, perhaps with the help of a knife tip, so they stay wrapped), and place them cheese-side down (at first) on the broiler pan. 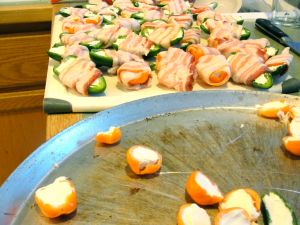 Place them under the broiler and cook the bottom side of the poppers before the cheese melts.

Cook the bottom sides first so the cheese doesn’t melt out.

Once the bottoms are done, flip them upright with tongs and complete the cooking. I sprinkled the vegetarian poppers (without bacon) with epazote for a extra dash of flavor before it gives way to the heat.

Flip the peppers with tongs and complete the cooking under the broiler.

Now you have a spicy appetizer for your parties, and one that intially tastes of cheese and bacon or spice, then after 20-30 seconds the heat kicks in nicely. :) 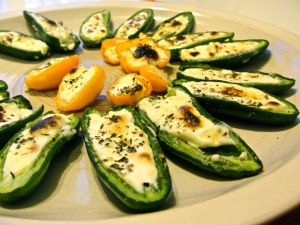 Vegetarian habanero and jalapeno poppers with cream cheese and epazote.

Even though some people that eat these poppers might think you’re trying to kill them, you’ll know you really love them. 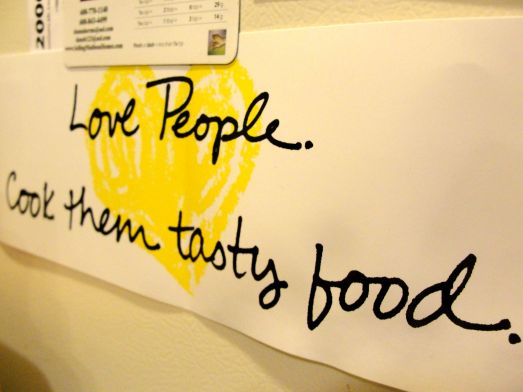 Happy new year to you all! Love people and cook them tasty food.