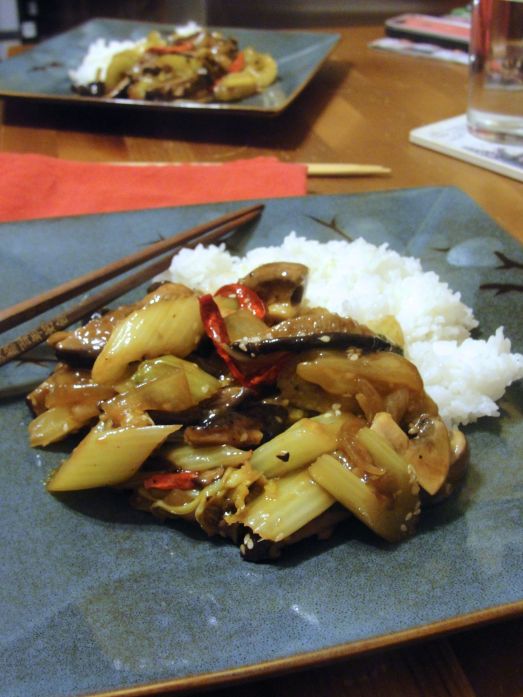 Shiitake and Celery Stir-Fry with sesame and ginger, served with rice.

When I was young, I was not  a fan of celery.  As a child, it was somewhat palatable when topped with peanut butter, but even then I preferred peanut butter on carrots.  Basically, I used to think celery was a great way to ruin things, especially soup or chili. (“What were they thinking?!”)

Today, however, I quite enjoy celery, especially in Chinese dishes. So, finding ourselves in the predicament of having two big bunches of celery in the fridge, we decided to make a dinner of it, a stir-fry of celery and mushrooms.  While any mélange of mushrooms, asian or otherwise, might work, we chose shiitake, for their rich, smoky flavor to compliment the mild celery.  Some fresh baby bellas add a nice texture contrast.

For the sauce, I prepared perhaps 2/3 cup total by mixing the following to taste:

Since the celery will release some water, the sauce need not be diluted much with water.

For the main ingredients:

Shiitake and Celery Stir-Fry with sesame and ginger.

While preparing rice in a rice cooker, we stir-fried the ingredients in a large cast iron skillet with a few tablespoons of canola oil, beginning with the onion, ginger and shiitake, and a fraction of the sauce; I also put all the bird peppers in the pan at this time to soften them while cooking.  Once those are somewhat tender, add the celery and more sauce progressively, stirring and cooking for desired tenderness of the celery.  I like it cooked, but somewhat firm.  Lastly, add the fresh mushrooms (so as they are only lightly cooked) and thicken the sauce with corn starch slurry if you like a sauce that clings to the ingredients.

When finished, add some dashes of sesame oil, and then sprinkle with sesame seeds; alternatively, you might do this on the serving plate instead. 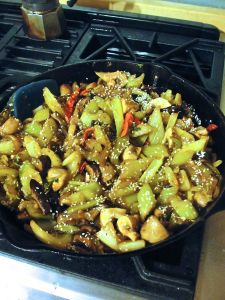 Shiitake and Celery Stir-Fry with sesame and ginger.

We plated the stir-fry with white sticky rice.  This time I used Nishiki rice and found it nearly identical, prepared in a rice cooker, to the Calrose rice I usually use; both are grown in California, but Nishiki suggests it’s a Japanese sushi rice. 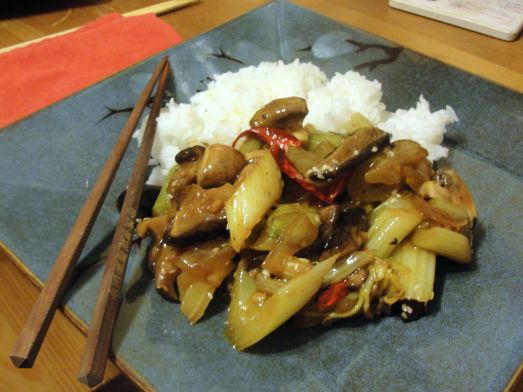 Shiitake and Celery Stir-Fry with sesame and ginger, served with rice.

This turned out to be a delicious dish, with the shiitake and ginger being a nice complement to simple, some might say, otherwise “shitty” celery.

For taking this celery from shit to shiitake, I’ll dedicate this post to FoodIsTheBestShitEver. Check ’em out if you haven’t already. :)

Here are some related recipes that might be useful, although I’ve not tried them: