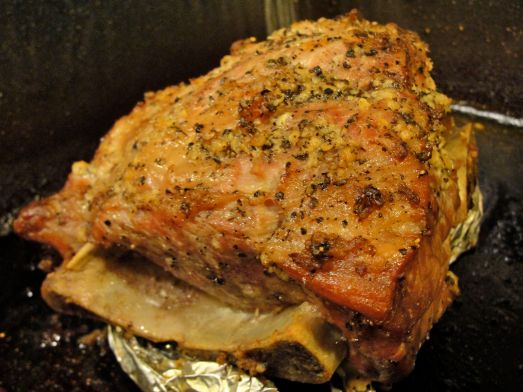 I’ve been working a lot lately, finishing up my research work for my Ph.D., and not finding time to post anything new and, instead, making many old favorites: fish tacos, fried rice, pizzas, and sandwiches.

However, I have been experimenting with various cuts of pork, most recently pork shoulder that was a bargain, on sale for just $1 per pound.

I originally bought and 8 pound bone-in pork shoulder roast, but I used about 60% of it to make carnitas for a group of friends. That left the rest, with the bone still in, for this recipe.

Mix those ingredients together in a bowl and slather it on all sides of the pork shoulder.

Next, I used a trick I learned from Alton Brown’s Perfect Roast Turkey Recipe. If you don’t have a suitable rack for a roasting pan, you can substitute a coil of crunched-up aluminum foil.

Foil stand-in for a rack in the roasting pan

Place the seasoned pork atop that rack in a roasting pan, and place, uncovered, in a 425° F oven for 20 minutes.

Pork shoulder, ready for the oven

After that, cover the roasting pan, pour some water in the bottom to keep the fat drippings from burning to the bottom, and cook for approximately 2 hours at 325° F and check the temperature with a meat thermometer; remove it when it has reached 180° F.

This time (2 hours) was for an approx. 3 pound roast. I found that mine was more than done in that time given that a thermometer read 195° F. I decided to cover it, even though some recipes don’t, since some follow-up comments in a recipe (linked below) said the garlic burned… mine didn’t.

After letting it rest on a cutting board for about 15 minutes, I sliced it and served it on a kaiser roll and topped it with a simple spicy mustard BBQ sauce: a mix of Grey Poupon Country Dijon mustard with a bit of sweet BBQ sauce and some chili garlic sauce. 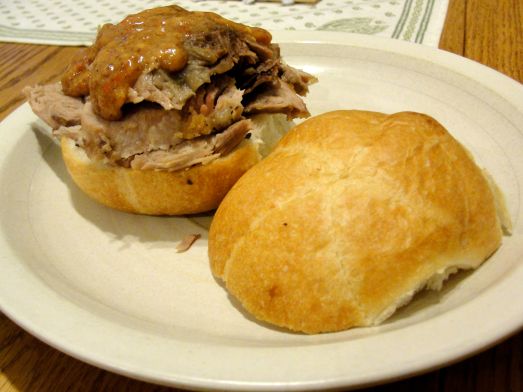 Here are the recipes that I consulted, pretty much relying on the first:

Truth be told, I actually considered six or more other recipes, but they either required marinating or brining, or called for either a large pressure cooker or slow roaster, neither of which I have.