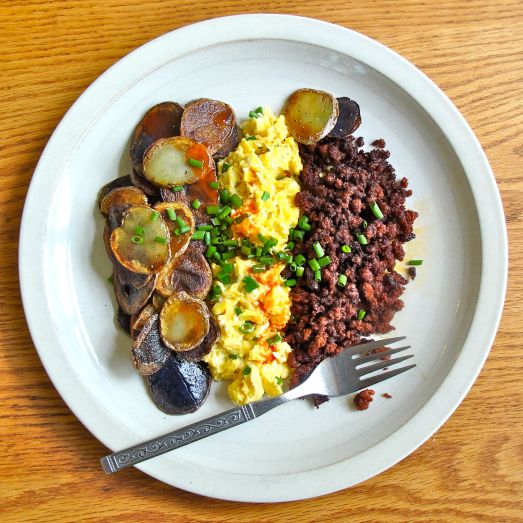 I’m not a “breakfast is the most important meal of the day” kinda guy. I don’t often eat breakfast, owing to the fact that I start the day later than most of you. :)
But, if I’m not going to have lunch, a big breakfast is in order.

Here’s one of my huevos rancheros variations.
(Triple-Decker Huevos Rancheros is my pièce de résistance.)

This morning, to serve just myself, I fried 3 sliced multi-colored small potatoes in canola oil, seasoned with salt & pepper and minced garlic at the end, so as not to burn the garlic.
Making potato chips in a pan is a bit tedious, but a texture somewhat crisp is achievable; use a big pan on medium to medium-high heat, and arrange the potato slices so that they don’t overlap much, and flip them periodically. A very thin, metal spatula works well.

Meanwhile, I fried 3-4 oz. mild mexican chorizo, crumbling it as it browned. While both the chips and chorizo drained on paper towel to soak excess oil, I scrambled 2 eggs in the chorizo pan, and stirred in a bit of sour cream and chives when the eggs were done.  Adding a cream or sauce to scrambled egg, just when done, lowers its temperature immediately to help prevent overcooking.

I served it topped with hot sauce and chopped chive.
How is it?  It’s hard to beat potatoes, eggs, and sausage for breakfast… or lunch. :)

P.S. If breakfast were a country, this would be its flag:

Flag of the Republic of Breakfast