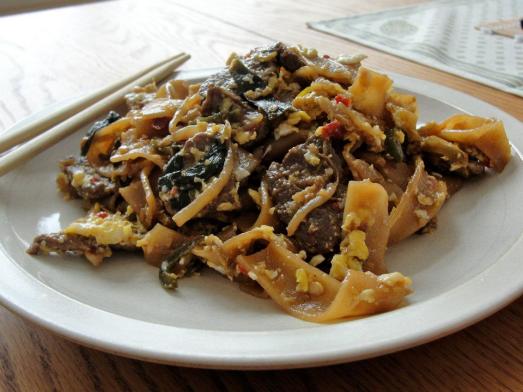 This dish is my approximation of a favorite a local noodle restaurant where it goes simply by the name “D8.” :-)

The noodles were extras, left over from my recent Pad Thai, and had been sitting in water in the refrigerator for a few days. (This seemed to neither hurt nor help; the noodles were just as they were after soaking only a half hour or so.)

This dish is a variation of fried flat noodles known as “Char Kueh Teow” as in the following recipes, popular in Malaysia and Singapore. It’s probably no surprise, then also, that it is somewhat similar to Pad Thai from adjacent Thailand, that is partially located on the Malay Peninsula.